Africa – The land of opportunities

One-fifth of all land on Earth is located in Africa. Africa, which is widely recognised as the continent where the human species first emerged, was home to more than 965 million people in 2007. The population of the continent has changed significantly over time with the current population of 1.4 billion people. This population is equivalent to 16.72% of the total world population and they account for around 2.8% of global economic output. African habitats and landscapes have changed as a result of that population’s changing demographics. Although environmental change is not a recent phenomenon in Africa, it has become more rapid, as it has in many other parts of the world. Amid all the excitement is a wave of young idealistic, social entrepreneurs, coming back or completing their education and remaining in Africa, determined to help shape the future.

Africa, with 54 nations and a combined land area of 30 million km (twelve million square miles), Africa makes up 20% of the planet’s habitable landmass. The overall length of Africa’s coastlines is 41,184 kilometres (25,596 miles). The continent is divided into Northern, Eastern, Western, Southern and central Africa.

In the first two decades of the twenty-first century, Africa as a whole underwent a change with increased democracy, peace, economic growth and prosperity. The world had a new perspective on Africa and developed a keen interest in its development. China and India, two developing nations, took the initiative and influenced this attitude.

Few questions the size of the African continent and its resources, which have a combined land mass larger than that of India, China, the US, and Europe put together. However, only a few people up until recently recognised it as a market that is quickly expanding. Over the past ten years, the continent of Africa has had an economic growth of 5% annually on average.

There are numerous “Africas” with diverse economies, ranging from oil exporters like Nigeria, Angola, Libya, and Algeria to countries like Egypt, South Africa, and Morocco that already have economies that are more diversified and have GDP per capita of well over $2000. Many nations including Kenya, Tanzania, Ghana, and Cameroon, are in the process of shifting from agricultural to manufacturing and service economies.

Commodity prices have influenced Africa’s growth because the continent holds a third of the world’s mineral resources, 10% of the world’s oil reserves, and over 70% of the world’s diamond production. The dependence on a few important commodities, and consequently their global price, has caused a great deal of market uncertainty, particularly with regard to several of Africa’s currencies.

Several countries have been working hard to expand other economic sectors as part of an effort to diversify away from resource-based economies. To date, growth has been seen in manufacturing, services, and tourism in particular (although, whether from ebola, localised terrorism or national political change, growth from the latter source is evidently volatile).

A Glimpse of the Future

The following summarise the key predictions and observations of the present and historical trends, providing a glimpse into Africa’s future:

Africa has a wide range of economies, including low-, lower-middle-, upper-middle-, and high-income nations. The fragility or conflict-affectedness of 18 African nations was graded. By utilising its resources and population, the continent was ready to forge a whole new course for development. Average growth rates in Africa did not yet correspond to this idea. The region of sub-Saharan Africa was predicted to grow by 2.6% in 2019, up slightly from 2.5% in 2018. Nevertheless, Africa had four of the world’s fastest-growing economies: Cote d’Ivoire, Ethiopia, Ghana, and Rwanda. Both national and global issues were blamed for the slow growth.

This year, the economies of the Democratic Republic of the Congo (DRC), Niger, Rwanda, and South Sudan, as well as the island nations of Seychelles and Mauritius, are predicted to develop at rates of GDP growth of 6% or more. Before the pandemic, several sub-Saharan African economies saw record-breaking growth. For instance, over the past 20 years, Ethiopia and Rwanda have had some of the world’s fastest growth rates, averaging more than 7.5 percent annually. However, because income data at the subnational level are occasionally unavailable, it is less certain if the benefits of economic expansion have been distributed fairly among areas within countries.

When we looked more closely at the variables influencing regional disparity, it is discovered that growth was mostly attributable to advancements in the foundational infrastructure that allowed lagging regions to catch up to national levels more quickly. The number of night lights per person more than doubled in the most underdeveloped areas, with oil exporting nations and frontier markets like Ghana and Kenya seeing the largest increases. 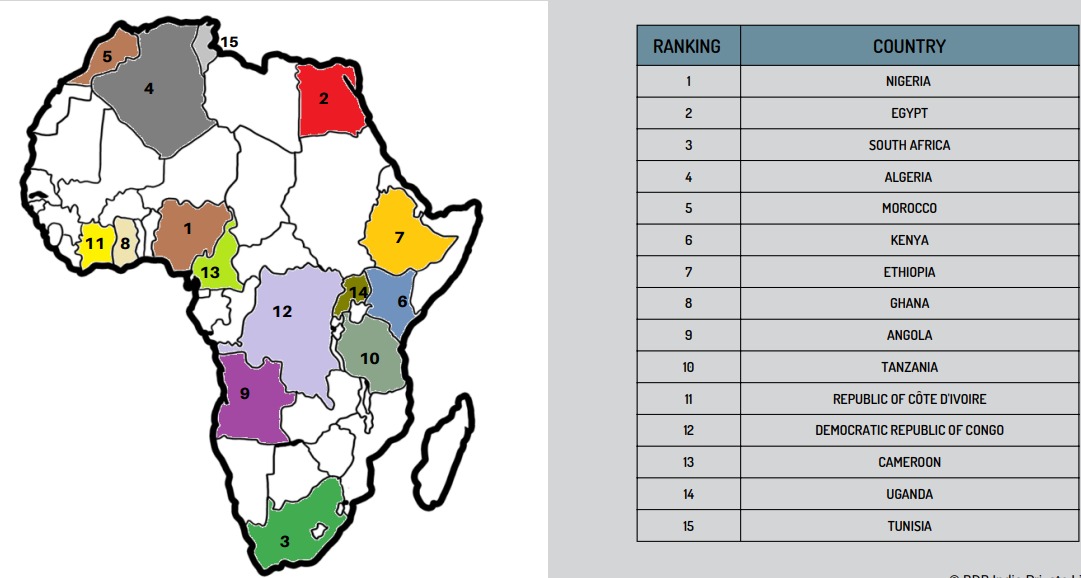 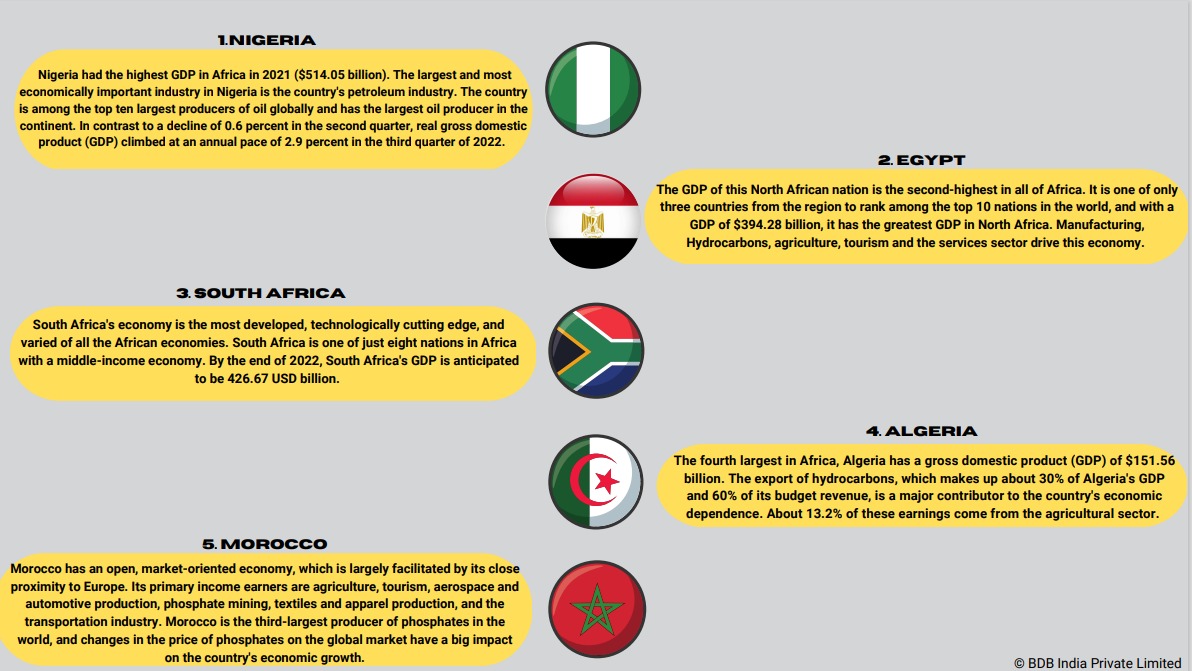 The 54 countries of Africa have assumed centre stage in the global investment agenda; African markets have experienced unprecedented expansion thanks to foreign direct investment and multinational projects in vital sectors including energy, infrastructure, and banking. The vibrant economies of Nigeria, Kenya, Ethiopia, Angola, and other countries present exciting opportunities for international industry and African residents alike. Many of these countries anticipate GDP growth rates in excess of 7% per year, every year, for decades to come.

Africa is home to 30% of the world’s mineral resources and 25% of the world’s natural biodiversity, but it also has significant untapped resource potential. Nearly half the world’s gold and one-third of all minerals are in Africa. In contrast to the ageing populations of Europe and China, Africa has a young population. A strong skills base across many regions offers considerable labour potential. With metropolitan regions accounting for two-thirds of population growth, there is great potential for a rising creative class and innovation hotspots like the “Silicon Savannah” in Nairobi, Kenya, or Kigali, Rwanda.

Natural resources in Africa offer a special chance to promote both economic and human development. However, there are considerable barriers standing in the way of African nations achieving this potential. First, there are issues with sustainable development and governance, such as bad investment choices and ineffective income management, environmental issues, desertification, resource conservation, and the eviction of communities from their ancestral lands. In addition to poor border controls, a lack of human security, a decline in investment, bad policy decisions, and a decline in biodiversity and formal trade, weak institutions also result in these negative consequences.

Africa and the Global Players – Trade

A quick glance at the globe map demonstrates Africa’s dominant position. Australia is situated at the same latitudes as the southern half of Africa, and the Atlantic Ocean, Indian Ocean, and Mediterranean Sea wash its coasts. It is bordered on the west by North and South America, on the north by Europe, on the north by the Middle East, and on the east by Asia. However, geography can be misleading. Africa has historically had less influence on world affairs than other continents
like Asia and Europe.

There are a variety of experiences with regard to how AGOA (The African Growth and Opportunity Act) has been used throughout the region, including those who completely missed the opportunity (Central and West Africa), those who initially registered strong growth before either experiencing a sharp decline or stagnation (many in Southern Africa) and latecomers who made significant progress (East African countries, including Ethiopia and Kenya).

African nations continue to be mostly dependent on exports of primary goods from the agricultural, mining, and extractive industries despite efforts to diversify their export sources. Long-term, this has negative effects on inclusive growth since it dims opportunities for industrialization and the creation of human capital, among other things.

India has trading ties with various smaller African nations even though the bulk of its commerce is with South Africa and Nigeria. India has increased the variety of its trade with Africa in recent decades. [40] The mix of goods that India exports to the continent has changed from textile yarns to petroleum, medicinal, chemical, and manufactured goods. At the same time, considering the extensive natural resource base in Africa, India’s import basket is nevertheless broad even though it is dominated by primary products and natural resources.

With the exception of Mauritius, India attracted investments from South Africa, Seychelles, Mozambique, and Uganda throughout the previous five years (2015–2020). Some of the major industries in which Africa has received FDI from Indiaa include telecommunications services, cement manufacture, financial leasing, power generation, air transportation activities, and advertising services. If investments from Mauritius are removed, some of the major sectors for investment include financial services, healthcare services (mostly from South Africa), and
pharmaceutical product manufacturing (Seychelles, Mozambique, and South Africa) (South Africa).

The services sector accounts for the majority of investments from India to Africa, and within this sector, the bilateral tax agreement between the two countries is mostly responsible. However, there are some tendencies in bilateral trade that are complementary to India’s, particularly in the case of resource-seeking ventures in the mining and chemical sectors. Under the African Continental Free Trade, these ties in trade and investment can be strengthened. 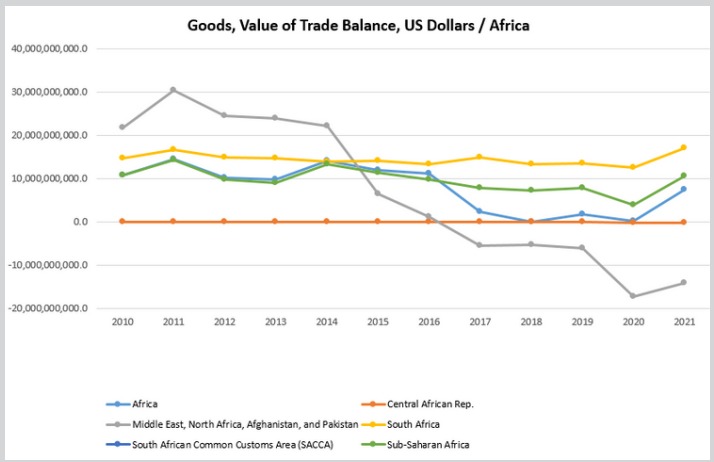 The COVID-19 pandemic and the widespread application of containment measures, such as lockdowns, social exclusion, and border closures, caused supply and demand shocks and a significant contraction in world trade. The trajectory of global trade, however, reversed in 2021 as a result of a sustained increase in global demand and output growth following a gradual easing of containment measures related to the pandemic, the widespread use of vaccines, and support from monetary and fiscal stimulus programmes that helped to improve trade performance. 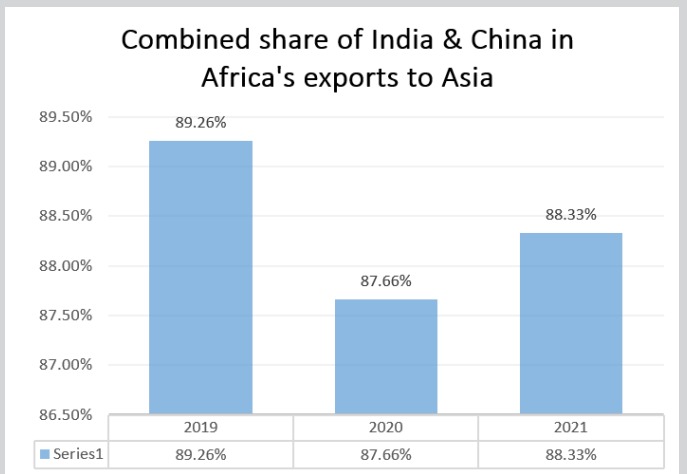 Even while the percentage in 2020 was significantly lower than the pre-pandemic share of 89.26 percent recorded in 2019, the combined contribution of China and India in Africa’s exports to Asia remained strong, rising from 87.66 percent in 2020 to 88.33 percent in 2021. Over the past three years, their total export share from Africa to the rest of the globe has averaged around 24.2%,  solidifying their status as Africa’s sole top trading partners. 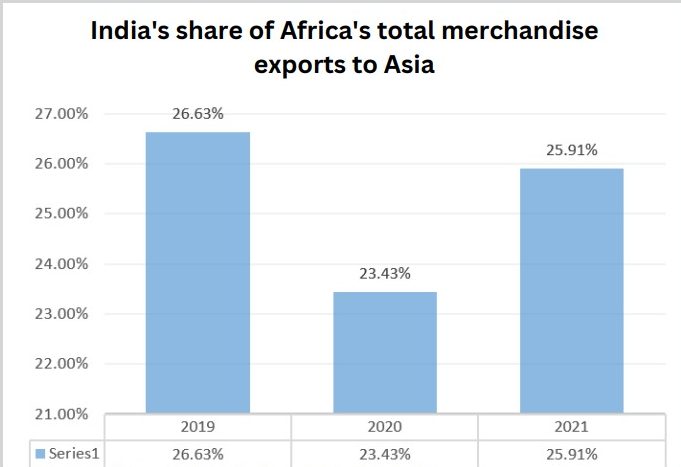 Although the performance in 2020 showed a minor deceleration due to the pandemic, India’s proportion of Africa’s exports to Asia has also been strong over the last three years, increasing by 25.91 percent in 2021 from 23.43 percent in 2020 and 26.3 percent in 2019. 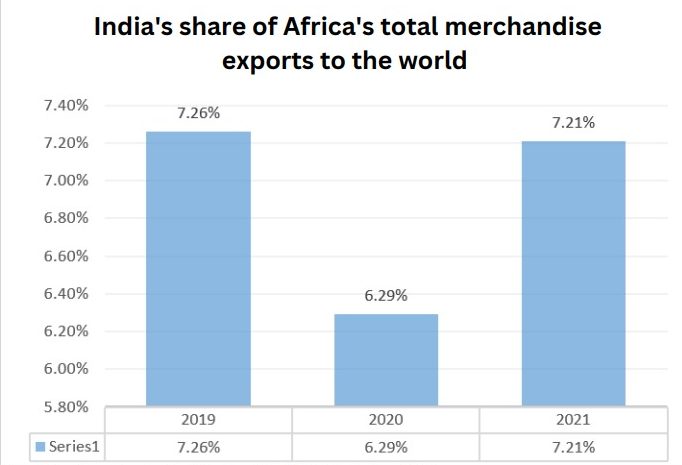 While Africa primarily exports crude oil, gold, coal, and other minerals, India’s principal exports to Africa are pharmaceuticals and refined petroleum products. With total investments in Africa totalling over $74 billion in recent years, India has become one of the top five investors in the continent. Additionally, Indian businesses are becoming more prevalent in resource-rich nations like Ghana and Nigeria. Some key areas have been marked out to catalyse Indian investments in Africa for a special focus :

Growing Indian construction initiatives show the expansion of economic ties with Africa. India has contributed significantly to these initiatives through grants, concessional loans, and capacity-building programmes, all of which have impacted considerably Africa’s socioeconomic growth.

To maximise output and boost employment rates, the majority of African nations are fusing structural reform initiatives with historically successful industries. Some of the industries have succeeded in exceeding their projections in this endeavour